“The best piece of advice I can give, the key characteristic needed to succeed, is perseverance” 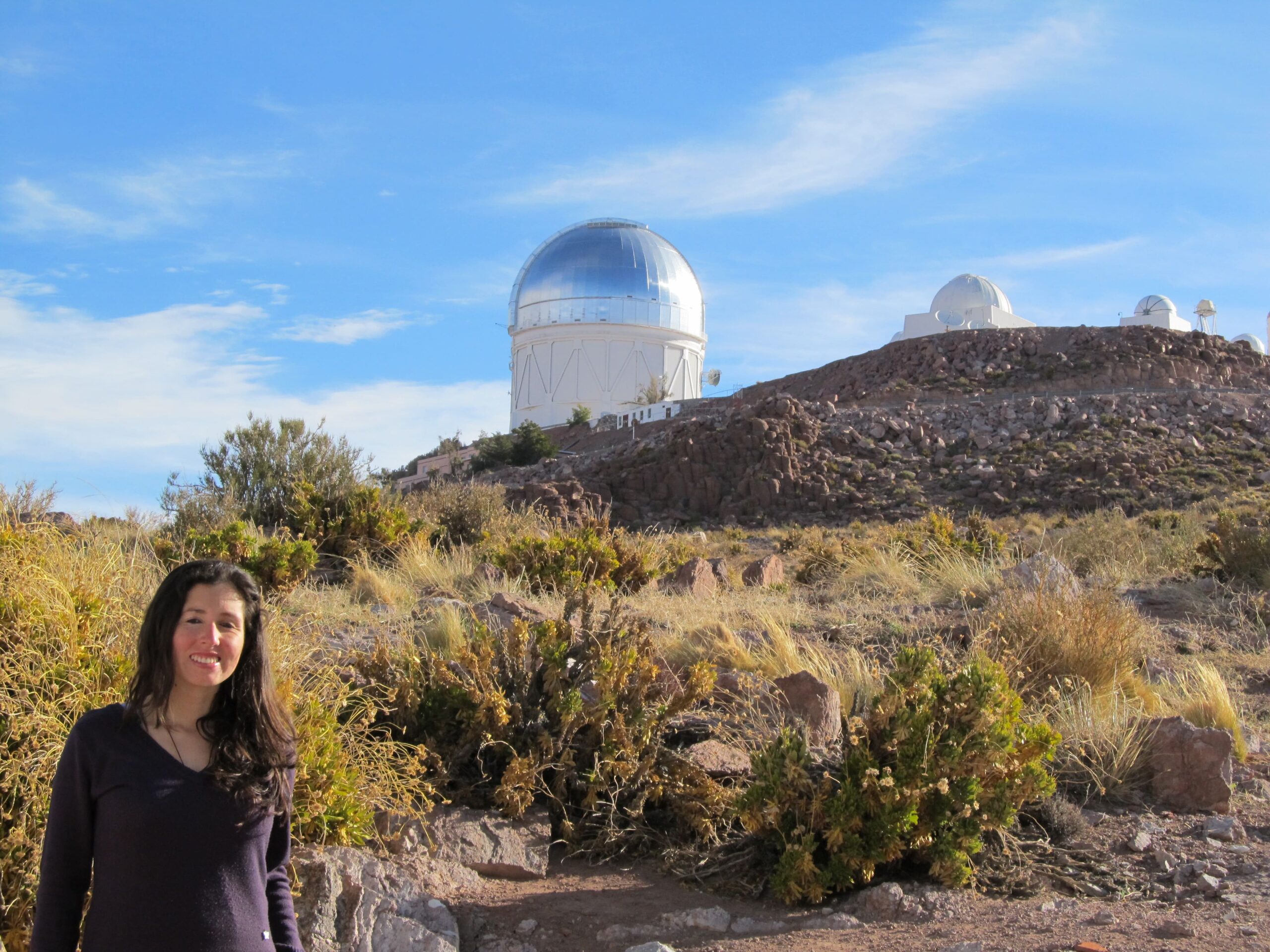 Born and raised in Coquimbo, Yasna Órdenes Briceño began studying Accounting at a technical high school, just like her parents. “I was always passionate about mathematics, because problems had an exact solution,” she explains. However, her academic path ended far from mere numbers, and rather, in the breadth of the night sky. Caught between galaxies and stars, Yasna has forged her career in the nebulous world of celestial bodies, focusing her research on dwarf galaxies, nuclear star clusters and stellar compact objects. Her work has paid off, and she was recognized in 2018 with the For Women in Science Prize, awarded by L’Oréal Chile together with UNESCO.

“I want to study the stars”

Her passion for the stellar universe was born when she was a young girl. “It must have had something to do when I went to the Elqui Valley, on the highway to it you can see the Tololo Observatory, and as a little girl, at thirteen, fourteen years old I thought: how amazing would it be to work there? In the mountains observing the sky,” she explains.

What started like a dream on the road would become a statement when, while finishing high school, she said to herself: “I want to study the stars.” The path to this looked uphill. “With a year to go before graduating I already knew it was a long process, I was more or less clear about what the path was. I didn’t know anything about chemistry, physics, or biology, and my parents made the effort to enroll me in pre-university courses. I liked physics better, and Professor Zúñiga, from the Universidad del Norte, encouraged me. He told me: you are motivated, you don’t know anything, but you want to know everything,” she recalls amusedly.

She entered the University of La Serena to study pedagogy in Mathematics and Physics, and soon her studies of calculus and differential equations took her to the area she dreamed of – the world of astronomy, that mysterious universe that has attracted the attention of key characters in history, such as Aristotle, Galileo Galilei, Hypatia of Alexandria, Maria Mitchell and Stephen Hawking.

In the land of Grey’s Anatomy

Her first hindrance was English. “Most of the literature was in English and I didn’t have a good learning base. I worked in a supermarket in Coquimbo, to pay for English courses, to catch up,” she recalls. Her efforts paid off when in 2010 she obtained the Astronomy Research Internship (PIA) grant, awarded by the Cerro Tololo Inter-American Observatory, an integral part of the National Optical Astronomical Observatories of the United States (NOAO) and the Association of Universities for Research in Astronomy (AURA).

“They chose two students related to Astronomy. I was in my fourth year of a degree in Physics with a major in Astronomy, and I was chosen along with Eduardo Bañados from the UC,” she recalls. The scholarship meant spending three months at the Tololo Observatory, in the residences in La Serena, with nine more students from different US states. For Yasna, it was like a reality show, where she also had the challenge of learning the computing code of her mentor from the Gemini Observatory, Dr. Peter Pessev. “At the time, I was nervous because it was like starting to play dress-up as an astronomer and I had to learn to program. My first codes were in IDL, where I also had to try to solve astronomical problems, obtain results to present at a conference in the USA, and also handle myself in English,” she says.

Yasna and Eduardo went to present their work at the Conference of the American Astronomical Society in Seattle. “I was very nervous, my English was not that great, but I was able to present my poster. I presented about globular clusters, which are associations of gravitationally attracted stars, thousands of stars that live and share space. They contain millions of stars that are like the sun or are of lower mass than the sun. In that first project about globular clusters, I focused on those within the Milky Way, mapping the sky, taking what a consortium of astronomers did in the 2MASS survey, where stellar objects were mapped by position, magnitude and color in the near infrared, using a color-magnitude diagram. The metallicity of the globular cluster can be known from the morphology of this diagram. Using models of stellar populations, we were able to obtain the metallicity and age of around 150 globular clusters in the Milky Way,” she explains.

The laws of the stars

Yasna graduated with excellence, and soon began to look abroad to continue her studies. “I was very skeptical of going to a place where they didn’t speak Spanish, so I applied to a university in the Canary Islands, in Spain, but a colleague convinced me to apply elsewhere,” she acknowledges. Thus, she came to Rheinische Friedrich-Wilhelms-Universität in Bonn, Germany, where she was assigned a scholarship. After only one month of studying German, and with her English that was not yet as fluent as she would have liked it to be, she began to study for her master’s degree in Astrophysics. Her thesis, with supervisor Dr. Iskren Georgiev, which focused on globular clusters in two distant galaxies. “These are peculiar polar ring galaxies, they have a ring of stars that rotate, polarly. In one of them, its polar ring is still forming,” she explains.

Anticipating what was coming and determined to continue her studies with a doctorate in what the Greeks call “the laws of the stars”, she applied to the Pontificia Universidad Católica de Chile (PUC). “I was drawn to the PUC because there was the line of research that interested me that was not present in the other universities in Chile,” she summarizes. Winner of the Conicyt National Scholarship, currently ANID, she entered to study the Doctorate in Astrophysics in March 2014, where she continued with the work of her Master. “I am very passionate about Globular clusters, and galaxies, I ﬁnd them very beautiful, in particular galaxies with their diversities of shapes” she says. 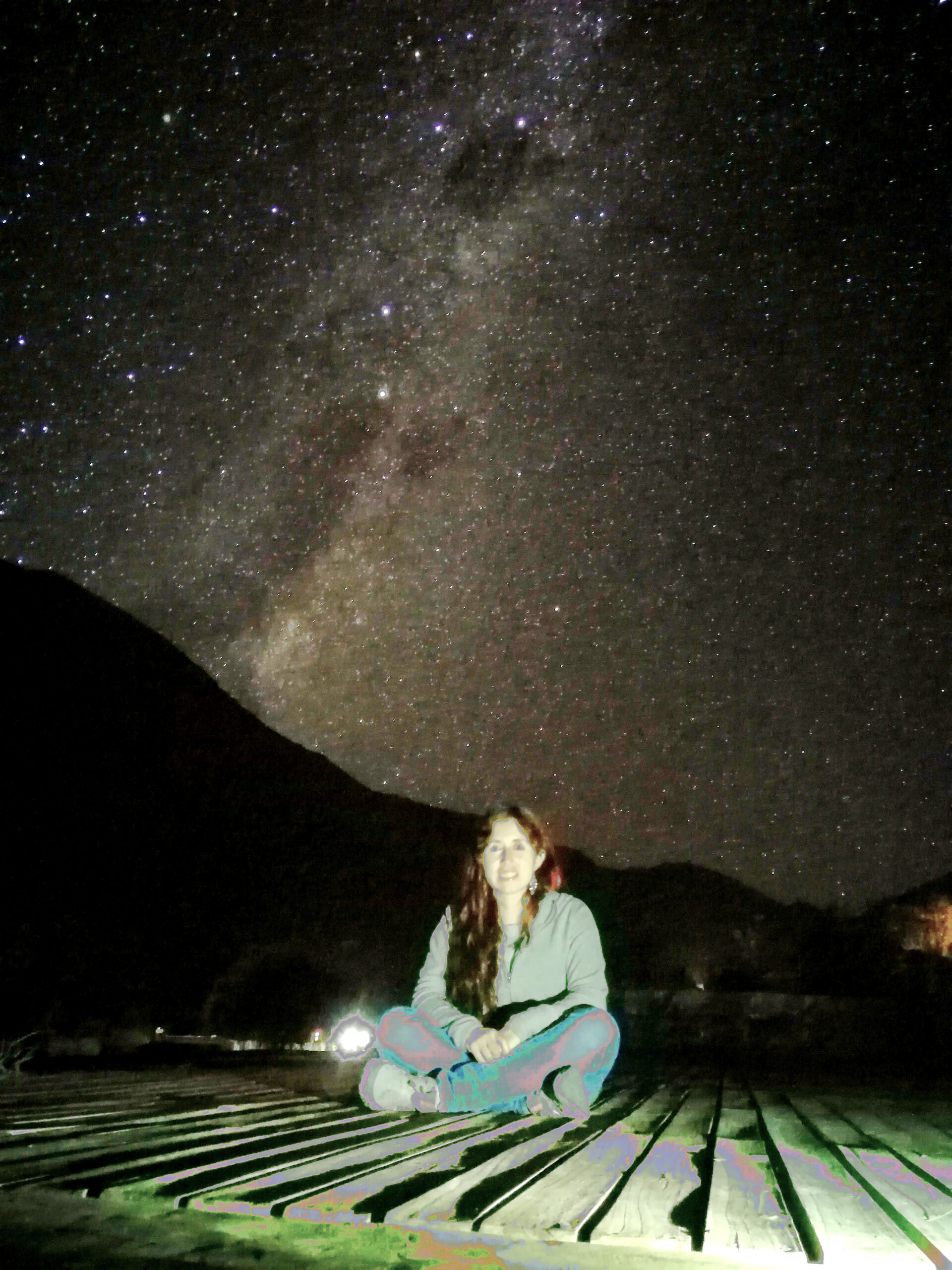 The enigma of a star cluster

As the Little Prince wondered whether the stars were shining so that one day,“everyone can ﬁnd their own”, Yasna sought to ﬁnd more than a mere star: a galaxy cluster, speciﬁcally an agglomeration of galaxies located in the Southern sky, called the Fornax
galaxy cluster.

“Galaxies are also in clusters,” she clarifies. “Some galaxies have a stellar core, which is basically a star cluster, but located at the center of the galaxy. In this place they co-inhabit with supermassive black holes. There are different theories of how these nuclei were formed. One is that the globular clusters of the galaxy fall to the center, and unite, forming only one, but there is another theory that says that they were always in the center, and that they grew over time with interstellar galactic material that is absorbed into it,” synthesizes Yasna.

With Professor Thomas Puzia, and guided by postdoc Roberto Muñoz, she learned to create computing codes to analyze the raw images of clusters and groups of galaxies, using for this the Blanco telescope, of 4 meters, with its instrument the Dark Energy Camera (DECam) in the optical and the VISTA telescope, of 4 meters with its VIRCam instrument in the near-infrared light.

“Thanks to these cameras in the telescopes, we managed to discover the dwarf galaxies that were there, but that before could not be glimpsed due to technological limitations. And despite the difficulty of the sample that had to be analyzed, because near-infrared data is complex to analyze, since the earth’s atmosphere leaves a complex mark on the image difficult to model, we were able to discover the different stellar systems in the Fornax region,” says Yasna. “I also focused on the dwarf galaxies with stellar nuclei and tried to understand how they have formed. For example, if the nuclear star cluster is young, it may have actually formed at the center of the galaxy, but if it is old, it may indicate that it could have formed from the coalescence of globular clusters.”

An accumulation of contacts

Yasna graduated with a double degree, Doctorate in Astrophysics from the Pontificia Universidad Católica de Chile, in co-tutelage with the Ruprecht-Karls-Universität Heidelberg, Germany. There she spent a year working at the Astronomisches Rechen-Institut, with her supervisor Professor Eva Grebel, creating international networks that she maintains to this day, adding an accumulation of contacts to those she already has in Mexico and the United States.

“The important thing is to keep them alive, review projects and see where to contribute, what one can write and make research proposals and what to observe in telescopes,” she concludes. “And you have to keep learning, setting new goals. The biggest piece of advice I can give is that the key characteristic needed for success is persevering. It may be that you do not have all the possibilities or economic resources, like me, but you have to make a sacrifice and be persevering, keep trying until it turns out. One can overcome difficulties,” she says.

A thought she shares from a hero of astrophysics, Stephen Hawking, who said: “Remember to look up to the stars and not down on your feet. Try to make sense of what you see and wonder about what makes the universe exist. Be curious. And however difficult life may seem, there is always something you can do and succeed at. It matters that you don’t just give up.”

That’s what Yasna did: she never gave up. “Now I can say that that the observatory that I looked at from afar when I was a child, the Tololo observatory, has now been the means to obtain the raw material of my research that I developed in the doctorate and that I continue to develop during my postdoc. I have been able to observe and be there in the mountains with those large telescopes that take images of the Universe,” says the young woman who, as a child, only wanted to study the stars.